After many decades of valuable use, it is time to retire the current Parrawa logo and adopt a newer, fresher and more modern logo and brand identity to take the Lodge into the future. And as a member’s Lodge, we want YOU to pick the new logo!

Why do we need a new logo?

We also need a logo that appeals to all member age groups. A newer, more crip logo that inspires #ParrawaPride in our Foundation Members, through to our current members and our up and coming members.

Last but not least, over the course of many decades of use, and the changing of many Board members, no one actually holds the current logo design files, so all we have to work with is the current, pixelated, low res version of the existing logo.

The brief and strategic direction

Working with a graphic designer and branding specialist the Board has been iterating these new logo concepts since May 2021. The brief was a redesign of the logo with a younger, fresher, more exciting edge, to bring the Parrawa brand up to date while increasing appeal for the younger generations – so that they will want to come back again and again, eventually become members themselves.

There is also an opportunity to make the logo more relevant to the Lodge’s broad range of uses. The lodge and surrounds are not just an attraction during the snow season. Parrawa wants to encourage members to use the lodge year-round, for activities like fishing, hiking or mountain biking.

It’s all about motion and momentum. A logo that not just represents the motion of a figure or entity down a mountain, either on a set of skis, a snowboard, or a mountain bike, but the motion of the Lodge itself, moving forward into the future.

What does each design represent?

This logo concept is a modernised, spirited update to the outgoing logo. It consists of a wordmark (the word Parrawa) and a brandmark (a figure that creates a letter “P” for Parrawa with its body). Using a few simple, fluid lines we capture a skier or snowboarder in motion. The angles and curves of the logo suggest freedom, action, and fun. The logo is stylised enough to be interpreted as skiing or snowboarding.

The flick of the blue line behind/to the right of the figure can be either a ski pole or the snow being kicked up behind a snowboard as they shred downhill. This logo concept is fun, active, energetic, straightforward and friendly. The typography is modern, clean and strong, while simple enough not to become dated. Unlike the other two designs, Design #1 has been created so that the wordmark and brandmark (the letter “P” for Parrawa) can be used separately. 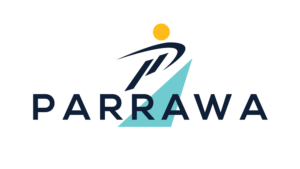 Once again this logo is modernised, spirited, but more sharp and angular compared to Design #1. It also consists of a wordmark (the word Parrawa) and a brandmark (a figure that creates a letter “P” for Parrawa with its body).

Rather than flowing, curved lines, this logo features sharper edges and is centralised with the brandmark figure able to represent either a skier or snowboarder traversing down a steep incline, represented by the blue triangle, or the blue triangle can represent Mt Perisher. 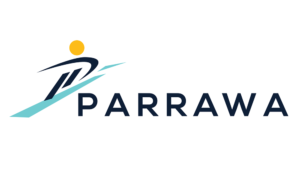 Once again we see a modernised, spirited logo with sharper, angular components. Design #3 also consists of a wordmark (the word Parrawa) and a brandmark (a figure that creates a letter “P” for Parrawa with its body).

Similar to Design #1 this logo concept is asymetrical. The flick of blue behind/to the fight of the figure can once again in this design either be either a ski pole, the snow being kicked up behind a snowboard as they shred downhill, or in this design, a person hiking up the mountain in the summer months with the yellow circle of their head representing the sun.

How do I vote for my favourite logo design?

Easy. All you have to do is submit your vote using the form below before Friday 27 May. Each member/family of Parrawa is entitled to ONE vote. So discuss your selection carefully amongst your family before you submit your vote. You can only vote once and your vote cannot be changed once submitted. Please keep in mind that we are looking for your feedback on the look and feel of your favourite logo option to move forward with. The final version may change slightly in look/colours.

The winning design will be announced in the next edition of the Parrwa Post email newsletter. After the announcement, we will change the Parrawa website and other branded assets and most importantly, we shall order a new sign for the exterior of the Lodge. Huzzah!

What else does the Board have planned for the new logo?

Once the members vote on the new logo that they want for the Lodge we shall begin production of a selection of branded Parrawa items, such as t-shirts, caps, stubby holders, coasters, key-rings, bottle openers and these items will be available for purchase from the Lodge managers behind the bar during the season. All funds raised will go to help make valuable improvements to the Lodge to increase the enjoyment and experience of its members.

So get voting below 👇 You only have until Friday 27 May to submit your vote!